Sisters in Cinema was founded as a resource for and about African American women media makers. Our mission is to entertain, educate, develop and celebrate future generations of storytellers and their audiences. The Sisters in Cinema Media Arts Center builds a pipeline of diverse, creative talent, scholars and audiences through multiple tracks.  While some of the programming is primarily for Black women and girls, other programming is open to the larger community. There will be workshops and screenings which will be open to everyone. Although the Center is still in the planning phase, we have begun to roll-out programming, with support of community partners, that is representative of what we will be doing at the Center. 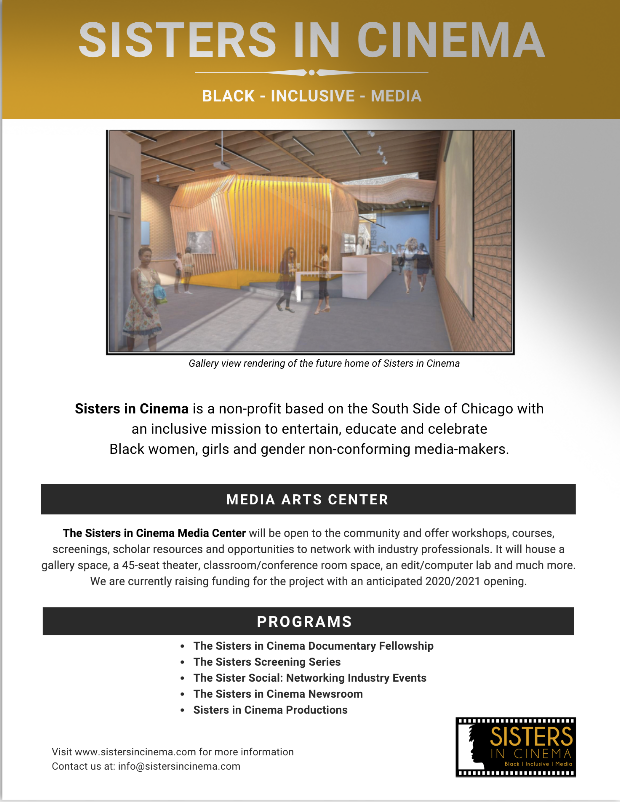 Our current project is The Black Lesbian Writers’ Room, an inclusive intergenerational pilot apprenticeship program for Black women, aged 17 to 63, selected through a nomination and application process. Our mission is two-fold: to create media that centers and explores the lives of queer Black lesbians and to develop a talented team of black women writers based in Chicago. With support from the Field Foundation, the pre-professional program is focused on training women from the community to write for television. Graduates of the writing or television intensive program have an opportunity to work in a simulated writers’ room for a series created by Yvonne Welbon that is currently in development called American Pride.

2) A career support network for anyone working or who wishes to work in creative media industries.

Our current project: Sisters in Cinema has been contracted by the Gene Siskel Film Center to provide career support and mentorship to five projects helmed by black men and women during the production of their shorts commissioned to celebration the 25th Anniversary of the Black Harvest Film Festival in August 2019. The  films will premiere at the festival.

Our current projects include a recent mini-film festival that as part of the Connect South Shore program and a film screening and lecture/workshop series being developed for  2019 in collaboration with the Center for American Culture at the University of Chicago around the Sisters in the Life book project.

4) A scholar track focused on the rich and understudied history of African American women media makers.

Our current project is a collaboration with the Black Caucus of the Society for Cinema and Media Studies. With support from a donor, we have launched The Sisters in Cinema Prize to champion scholarship focused on the work of African American women media-makers. The $500 writing prize will be awarded to a graduate student at the SCMS Conference in March 2020.

5) Opportunities to work in production on media projects focused primarily on African American women and girls.

With a recent project, four emerging filmmakers were hired to work on a production directed by Yvonne Welbon called The Roadwork Oral History and Documentary Project. During the Summer of 2018 the team traveled to shoot the Roadwork 40th Anniversary Sisterfire concert at the Smithsonian Folklife Festival in Washington, D.C.